We have created a number of illustrated presentations with integrated sound using material from the Kendal Oral History Group archive.

This talk is adapted from the book written by Joan Humphreys and Ann Nelson based on interviews from the Kendal Oral History Group archive with people who lived in the early part of the 20th century. It covers peoples’ lives from birth through schooling, jobs, entertainment to their old age. (60 minutes)

‘The Old Yards of Kendal’

This talk introduces, via Kendal Oral History Group interviews, the voices and stories of various people who lived in the early 1900s in some of the original Kendal yards which fronted Stricklandgate and Highgate, and tales of what it was like to live with outside toilets but without electricity. (50 minutes)

In this presentation five topics have been selected to cover a wide range of wartime experience in the South Lakeland area during World War Two. They include:  the ways in which the war impacted on the lives of children, including evacuees;  the changes that took place in farming under the direction of the War Agricultural Committee, with Land Army girls and POWs helping to work the land;  the wide range of war work undertaken in factory and workshop; the impact of the military including the Home Guard, army battlegrounds, US convoys and bombings, and, finally ‘Getting By’ looking at issues such as rationing, ‘Digging for Victory’, the black market and VE day. 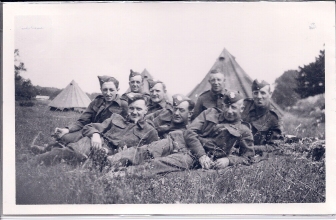 This presentation looks at the experience of people in Kendal during World War Two. It is divided into four sections including: the experience of children at school and at home, the voluntary work they undertook, the experience of evacuees and their impact on local children; the next section looks at the ways in which Kendal’s factories and workshops were transformed during the war to create much-needed materials for the war effort and the support services put in place to help industrial workers;  the impact of the military includes the Home Guard, Civil Defence, US convoys and Bombings. Finally,  ‘Getting By’ looking as issues such as rationing, ‘Digging for Victory’, the black market and VE day.

‘Childhood in South Lakeland’
This presentation examines various aspects of childhood  in town and country in the early twentieth century. Subjects covered include games and pastimes, school, children working to help support the family and the experience of childhood illness.

‘Rural Life in South Lakeland’
In this presentation the experience of people of all ages living in the country in the early twentieth century is examined.
Subjects covered include childhood activities, work, health and social life.

‘Railway Workers and their Families in the Early Twentieth Century’
This presentation includes the recollections of people who worked on the railway, as well as those of their families. In addition the stories of children playing on and around the railway are included, together with descriptions of trips on the railway in the early twentieth century.